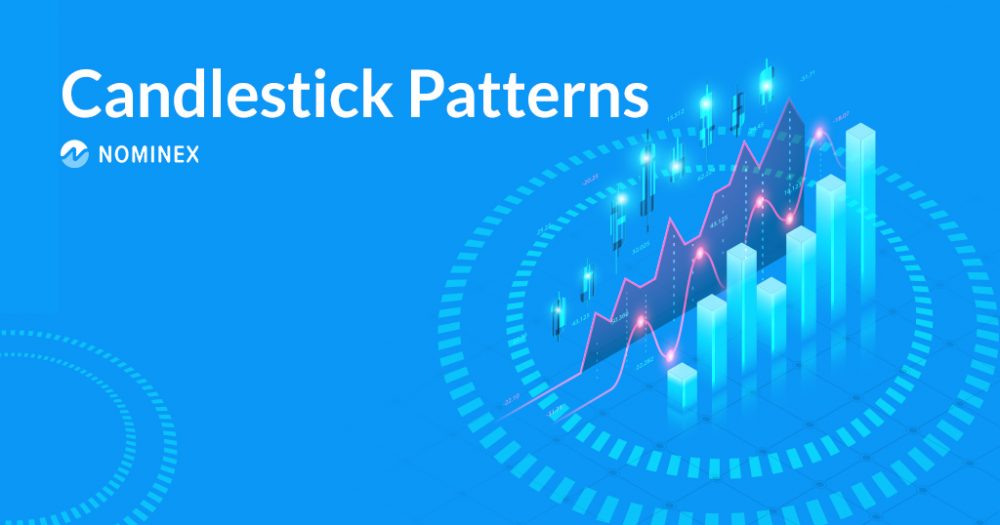 It include a series of known formations on the candlestick charts that give traders an insight into price action and market movements.

Candlestick charts are traditionally used in rice tradings in Japan and found their way to modern tradings due they are believed to provide more information in visual forms.

While regular price charts are formed only by price action and are useful in tracking price movements, candlestick charts offer more data such as open-to-close range, intra-day high and low, and market direction.

Candlestick charts are widely used by experienced traders as they could be used to understand the market better visually. However, reading these charts requires a basic knowledge of their components.

In the following article from Nominex, we try to introduce the basics of candlestick charts to understand how candlestick patterns are formed. Then dive into these patterns to explain their meanings and how they could be used to make better trading decisions.

What are candlestick charts?

Several types of price charts are available for trading in the modern era. The most common type of price chart that is used in Western trading platforms is a Line chart that simply marks out the closing price of each period. Connects these points to form a line that shows price movement.

Candlestick charts, on the contrary, show opening and closing prices, intraday high and low, and market direction all in a glance. That’s why these charts are preferred by most experienced traders.

These details help traders to make better trading decisions by identifying regularly occurring patterns. Which help them forecast the short-term direction of the price.

As its name suggests, candlestick charts are made by candlesticks, which typically details a single day’s trading. Each candlestick has three main components:

–         The body: visually represents an open-to-close range of price

During the time, individual candlesticks form patterns that could be used by traders to easily recognize major support and resistance levels.

Additionally, these patterns help traders to get a deep insight into the market easily. When they are used along with other technical analysis indicators and tools, they provide a strong framework for more successful tradings.

Candlesticks are formed by up and down movements in the price. When you look at these price movements they might appear completely random, while it may be true, at other times they form patterns that are used by traders to analyze the market or make trading decisions.

Many candlestick patterns are available that could be used for various purposes.

Like other technical indicators, there is no guarantee that a certain indicator works properly all the time. They could be used to understand the tendencies in price movements in more detail.

As we mentioned earlier, candlestick patterns form over time. Several types of patterns form on these charts that are known by descriptive names like a hammer, three white soldiers, morning star, and dark cloud cover, to name only some.

The time to form a pattern can take one to four weeks. These patterns, when are used correctly, can act as a source of valuable insight into an asset’s future price action.

However, reading bullish patterns requires the understanding of the following principles:

–         Bullish confirmation is required for most bullish reversal patterns. That means they should be followed by upside price moves which form visually as long hollow candlesticks accompanied by high trading volumes. This type of confirmation occurs within three days of the pattern.

Bullish patterns are generally used by traders to identify momentum and trading opportunities.

Traders can also use other means of traditional technical analysis, such as momentum indicators, oscillators, trend lines. Volume indicators along with these patterns to make more rational trading decisions.

In the following, we will introduce the most important bullish candlestick patterns.

Some of the most important bullish patterns include:

The hammer is a bullish reversal pattern that suggests an asset’s price is nearing the end of a downtrend. It has two types:

The hammer candlestick has a short body with a longer lower shadow that means sellers driving prices lower during its trading session to provoke strong buying pressure to end the session on a higher close price.

So when you identify a hammer pattern on a downtrend candlestick chart, it suggests a bullish reversal movement.

However, this pattern should be confirmed by an upward trend in the following few days and also an increase in the trading volume.

An inverted hammer pattern also forms in downtrends and suggests a potential trend reversal or support.

Its main difference with the hammer pattern is that it has a long upper shadow, which indicates high buying pressure, followed by noticeable selling pressure.

On a candlestick chart, its confirmation comes in the form of a long hollow candlestick or a gap up, along with heavy trading volume. It simply suggests that buyers will soon take control of the market.

It is one of the candlestick patterns that generate buy signals that could be easily identified by traders.

The bullish engulfing pattern forms by two candles. Its rule is that the second candle simply engulfs the body of the first one, regardless of the length of the shadows.

The first candle should be a short red candle that is completely engulfed by the second larger green candle.

In traditional candlestick charts, this pattern is a combination of a short dark candle followed by a larger hollow candle.

It suggests that buying pressure is pushing the price up to a higher level than the previous high, which is a great trading opportunity.

However, to take advantage of this pattern, it is recommended to wait to see price moves higher than the high of the second engulfing candle as a downtrend reversal confirmation.

Just like bullish patterns, these bearish patterns also require bearish confirmation, which suggests further downside by a gap down, long black candle, or a high decline in volume.

The most important bearish patterns include:

In the following, we will introduce some of these bearish patterns that could be used to generate downtrend signals, in which traders typically short their positions and sell their assets to avoid large losses.

This pattern could be considered as the bearish equivalent of the hammer pattern; as it has the same shape but instead of a downtrend, it appears at the end of an uptrend.

It suggests that there was a strong sell-off during the day, But buyers were not able to push them up again.

When this pattern appears on a candlestick chart, it could be considered as a strong buy signal for traders in a long position.

However, it should be confirmed by its following candlesticks, as temporary falls in an overall uptrend are not rare.

It is a three-candlestick pattern that is the bearish equivalent of the bullish morning star. This is a short green or red candle that appears after a long green candle and before a large red candle.

It often appears at the end of an uptrend and indicates a downtrend reversal.

This provides the strongest downtrend signal when the third red or black candle is larger than the first one and causes a larger loss.

Dark cloud cover is another candlestick pattern that indicates a bearish reversal.

As its name suggests, it consists of two candlesticks: a red candlestick that opens above the previous green candle, and like a dark cloud covers it, and closes below its midpoint.

It indicates that a bullish trend can not overcome bears and price falls sharply.

When this pattern associates short shadows, it suggests that the downtrend will be extremely strong.

In general, as a strong downtrend signal, it is used by traders as a reliable sell signal.

In addition to bullish and bearish patterns that show a reversal or change in direction of the market, some patterns could be known as continuation patterns.

These candlestick patterns help traders to identify a period of rest in the market, in which the current direction of the price movement would be followed.

Several types of continuation patterns are available that could be identified easily on a candlestick chart.

These patterns are formed with at least two candlesticks, which indicates the trend is strong enough to continue its direction.

Some of the most important continuation patterns include:

In the following, we will introduce some of these continuation patterns that could be used by traders to identify low volatile markets.

Doji is one of the most common continuation candlestick patterns that appear when buyers and sellers struggle together.

In these conditions, the price closes almost at the same price point of its opening, which causes the formation of a cross shape on the candlestick chart.

As you can see, this pattern indicates the struggle between bulls and bears without any net gain for either side.

When it appears as such, it could be considered as a neutral signal, but when it appears along with reversal patterns such as morning star or evening star, it might suggest a continuation in their direction.

This continuation pattern suggests that the current trend will be continued, whether being a bearish trend or a bullish one.

It is not a three-candlestick pattern, as one might guess by its name, but consists of five candlesticks: two red candles that limit three green candles.

As you can see, it shows a struggle in the market between bears and bulls, in which bulls try to reverse the trend, but they don’t have enough strength to succeed.

It could be read as a sign of a continuation in a downtrend, as it begins with a long red or black candlestick that will not be covered by the following green or white candles.

Candlestick patterns include shapes on the candlestick charts that form according to some conditions in the market.

Bullish, bearish, and continuation patterns are the main types of these patterns, each of which contains several patterns.

In this article on Nominex, we tried to introduce all of these pattern types. We also tried to cover some of the most important patterns in all of these three types.

Candlestick patterns are very popular among crypto traders because they could be used easily to understand some important factors in the price movements of the market.

Most modern trading platforms, including Nominex, provide tools to identify these patterns easily.

You can also visit the Nominex website to learn more about these patterns and how they could be used to make better trading decisions.