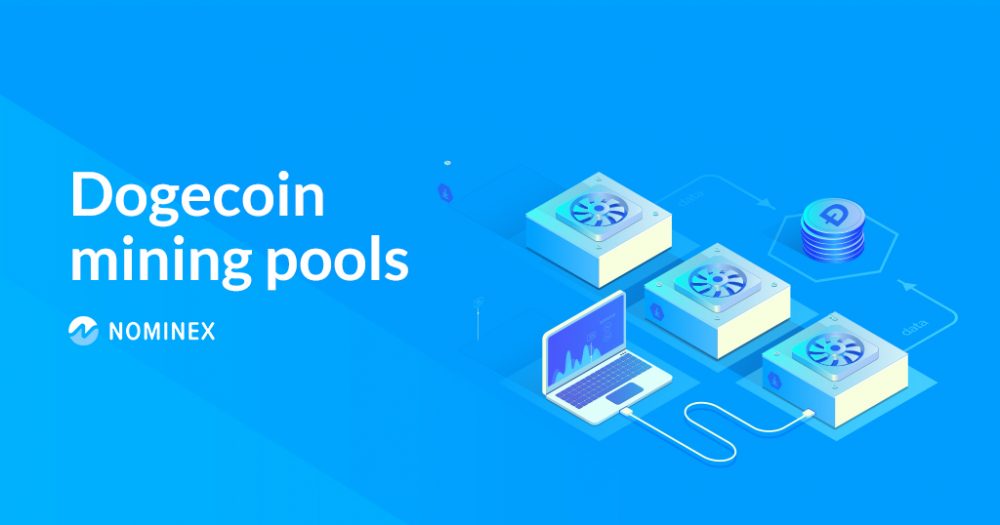 The more popular digital currencies become, the harder it becomes to mine them. Even Altcoins, after Bitcoin or Ethereum, face many difficulties in terms of mining in 2021.

However, Mining pools are designed to make it easier for more people to join the pools and make more money by mining. But does Dogecoin also have a mining pool, and if so, how can you find the best one?

We will first show what is dogecoin, then talk about its mining and the best dogecoin mining pools.

Although Dogecoin was once made for just one joke, it is now one of the best digital currencies on the market with over $ 2 billion in trading volume.

The structure of Dogecoin is very different from bitcoin. Its algorithm is based on Scrypt, which is also used by other currencies such as Litecoin. Of course, because its main algorithm is Proof of work, it can be mined. So with a powerful computer or miner, you can mine Dogecoin.

ASIC miners exist that work with the Scrypt algorithm. Currently, however, Litecoin is worth more mining with ASIC mining devices than Dogecoin. So it is better to join the miner pools instead of mineing them directly with the machine.

Since 2018, the difficulty of mining Dogecoin has increased dramatically. So either you have to pay a lot of money for the powerful Dogecoin miner, or you have to join one of its mining pools.

Mining pools generally allow you to make more money from co-mining than when you mine a currency yourself. In a mining pool, several devices enter, mine, and the amount of reward obtained is divided among the people present in the pool. In this case, the profitability of Dogecoin mining will be higher.

Each pool gives its users a different reward for gaining resources. You should first check the pool’s cost, compensation, and security and then join it to start mining.

Also, after inspecting the pool, you should make sure that you can mine Dogecoin in it. Some pools allow their users to use other digital currencies that are more profitable. You can use an online profit calculator to find out how beneficial it is to mine a digital currency.

Sometimes some pools do not charge extra, but you will have to pay for them when withdrawing money. So try to consider the costs of PPS, PPS +, PPLNS systems before choosing a mining pool.

Prohashing Mining Pool allows you to mine Dogecoin. Of course, this is one of the few that makes Dogecoin mining possible. First, you can pay the fees in any currency you want. Then it will mine Dogecoin, and then your profit will be received in bitcoin.

Prohashing is based on the Pay per Share system. You can deposit the profit from this mining pool directly to your wallet or bank account. Its algorithms also allow you to automatically adjust the hash power and mine the best possible digital currency. The cost of working in this pool is 4.99% of each block finding.

The Multipool Mining Pool works to mine a wide range of digital currencies, including those built with the SHA-256 algorithm. Of course, the Scrypt algorithm is also supported in this mining pool, and you can also use Litecoin and Verge. Of course, withdrawals are considered as Dogecoin.

There is no settlement fee in this pool by activating the automatic payment system. Other features include support for merged mining. You can mine both Litecoin and Dogecoin simultaneously so that the hash power does not go down.

A Pay Per Share-based system is the 1Coinpool Mining Pool, which rewards you for every percentage of every block you discover. Coins will go directly into your wallet.

In this mining pool, in addition to Dogecoin, you can also mine other digital currencies such as Ethereum and ZCASH. However, this site has no side cost, and they claim to discover three blocks every week.

The pool’s reward system is based on PROP, and because the system only rewards when it discovers a block, there is a shallow risk in this type of pool.

How to choose the best Dogecoin mining pool

There are many standards to consider when choosing the right Dogecoin mining pool. The following are the standards:

The best way to choose is to first select the mining pools to mine several different digital currencies, including Dogecoin. Also, as we said, some pools allow you to choose the most profitable digital currencies for mine and profit from them. These types of pools are also the best nettles. Finally, you should have a digital currency profit calculator to calculate the final yield and ultimately choose.

The choice is yours. You can choose any of these Dogecoin mining pools, give your resources to it, and get the profit quickly in your digital wallet. All services are low-cost, and you can safely join any of them no matter where you are. Have you ever worked with mining pools? Write your comments for us.